Complete a book review of "War Horse" including your reflections and opinions from the novel.

In this episode Joey found himself between the German and British lines. Two soldiers, one from each side risk their lives trying to get him to come over to their trenches. The soldiers speak to each other in the middle of No-Man’s-Land and explore why war and fighting can be very difficult to make sense of.

Click on this link below and watch this short video clip that tells the story of how, ‘The Christmas Truce’ broke out between the opposing armies at Ypres in Belgium on Christmas Eve in 1914.

Using your imagination write a short story (Gr 1-2)/ short paragraph (Gr 3-4) about how you would have felt if you were a soldier here on Christmas Eve. Think about how you suddenly hear the Germans singing carols, then you nervously climb over your trench, meet the enemy, shake hands, exchange gifts and then play a game of football. How would you have felt during this time after experiencing the horrors of war?

Week Seven - The loss of a friend - War Horse activities

Week 6 - Working for the Germans - Activities

At the beginning of this episode the two soldiers have become prisoners of war. Write a short paragraph to explain what you think this means and try your best to predict what may happen to the men and to the horses.

Captain Stewart’s opinions reveal the feelings of many soldiers who considered it pointless for both men and horses to be sent into battle against barbed wire and machine guns.

Write a short paragraph giving your opinions of whether or not animals should be used in warfare?

Part A: Answer in full sentences

Find the meanings of the following words:

Click on the link below to listen to “Episode Two: A Cavalry Horse”. In this episode, Albert finds out that Joey (the horse) has been sold by his father to Captain Nicholls to become an army horse.

-Part (a) Write a paragraph to explain how you think Albert would have been feeling when he found out about Joey being sold? What was Albert’s only hope for the future?

-Part (b) Write a paragraph on the following: Would you be willing to sell a pet in order to earn some money for your family during poor times? Include reasons!

Click on the link below to listen to episode one of "War Horse" by Michael Morpurgo. Complete the summariser activity from your "Thinking Bookmark" for this episode. 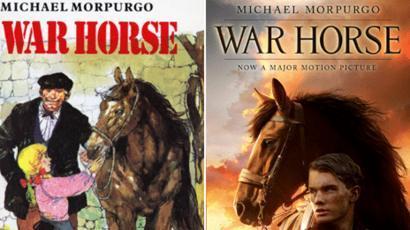